State Hopes To Squash Hemlock Pest Before It Spreads

A bug that kills hemlock trees has invaded West Michigan. Hemlock woolly adelgid has been found in four counties: Allegan, Ottawa, Muskegon, and Oceana. It’s a tiny bug that makes small, cotton-like sacs at the base of a hemlock tree’s needles.

This month the state awarded more than $800,000 in grants to help invasive species managers survey, map, and control Hemlock woolly adelgid. The bug was spotted in Michigan in 2006, but it’s been plaguing the east coast of the U.S. for decades. 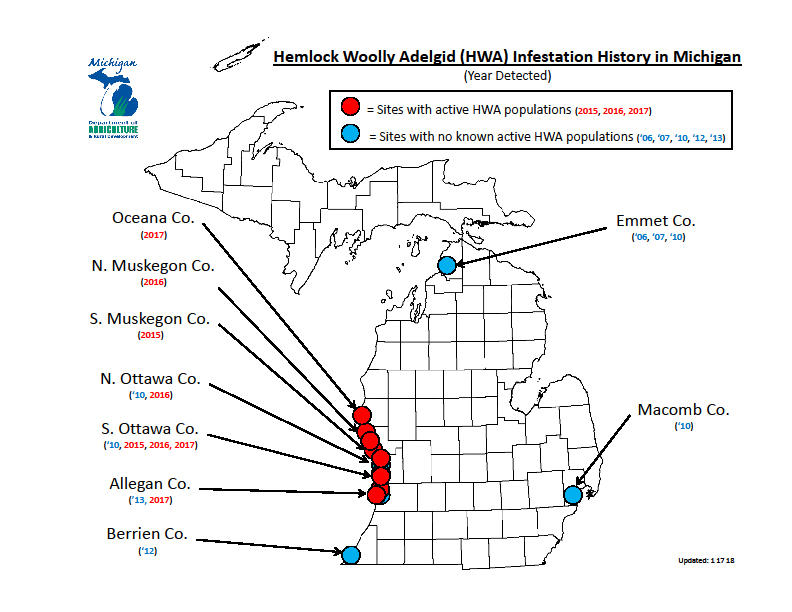 So far the state has been able to control what populations of Hemlock woolly adelgid have popped up, but officials with the Michigan Department of Natural Resources say this new infestation is bigger than what they’ve seen in the past.

Susan Tangora is with the DNR’s forest resources division. She says the likelihood that the pest is outside of those four counties is high.

“It’s really hard to detect, so we really need the public to be on the lookout,” she said.

Even so, invasive species managers are confident they can stamp out the pest. Drew Rayner is the coordinator for the West Michigan Cooperative Invasive Species Management Area.

He says Hemlock woolly adelgid is easily treated with insecticide and — unlike the Emerald ash borer — it’s a much slower bug. It can take four to ten years for it to kill a tree.

“So once there is an infestation in the area, there’s still time to do something about it,” said Rayner.

Rayner says if you own a hemlock tree, check the under side of the branches for the white sacs.

If you think your tree might have Hemlock woolly adelgid, you can call the Michigan Department of Agriculture and Rural Development. There’s contact information and more at this website.